The Chr. A. Rotermann Mill and the Rosen Distillery were the first industrial companies formed in the former bastion belt between Mere Blvd and Jaama St (currently Hobujaama St). The undeveloped esplanade, proximity to the port, and good railway connection favoured the area’s formation into a complete quarter of industrial structures. Christian Abraham Rotermann’s (1801–1870) business began in 1829 with the production and trade of wooden building materials in a covered market along Mere Blvd. In 1849, Chr. A. Rotermann built a department store on the edge of Viru Square, and over the course of time, an entire complex of factories developed next to it (a woodworking plant, starch- and alcohol purification plants, a flour plant, a bread factory, and a cold house). In 1865, Chr. A. Rotermann’s son Christian Barthold Rotermann took over the business from his father, and continued involvement in the foods- and woodworking industries. In 1870, there was denser development along what is now Hobujaama St in the form of mills, sheds, and warehouses. In 1888, a prominent market building was erected on Mere Blvd. A flour mill completed there in 1890 was the largest of such particular structures in Tallinn. In 1900, a stone elevator was erected on Hobujaama St next to the low pre-existing wooden structures. In 1902, a 50-metre boilerhouse smokestack was built. In 1912, the Rotermann Department Store was expanded, and a new bread factory and office building were built. Structural changes took place in the foods industry during the years of Estonian independence; however, Ch. Rotermanni AS continued its successfully-developed operations in the areas of foods and wood processing regardless. At that time, the factory employed eight people. The AS Rotermann factories closed down in 1940. In 1945, the factory was nationalised, and the V. Kingisepp Grains Combine (later the Leibur Production Association) took over ownership of the buildings. Industrial production ceased in the 1990s, and the structures were sold off to private owners. The period of transition also brought along the looting of a large number of the buildings, which ultimately led to a fire in the barley mill – one of the most valuable structures in the complex. The new century also ushered in development in the area: one after another, a number of historical buildings have been restored, and new ones have been built. As of today, it has developed into a contemporary, actively functioning urbanist environment that offers a high level of architectural quality.

The Rotermann Salt Storage (which as of today is indeed cut off from the rest of the quarter by a branch of the new Ahtri St) is one of the area’s most magnificent limestone structures. The arched cellar of the building, which was completed according to a project drafted by Baltic-German engineer Ernst Boustedt in 1908, was space for salt storage; the processing of imported salt was done on the upper floor. The Salt Storage was reconstructed in 1995–1996 according to a project by architect Ülo Peil and interior architect Taso Mähar (both from the architecture bureau Urbel & Peil). During the course of this reconstruction, the structure – which was originally a single storey – was divided into multiple floors with an intermediary ceiling and galleries in order to thus offer a greater number of exhibition spaces possessing different characters. 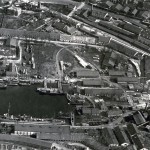 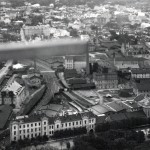 Building after reconstruction in the 1930s. Wooden oriels have been added to the end façade. 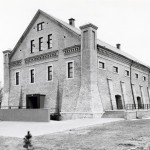 The freshly-completed architecture- and art centre in 1996. 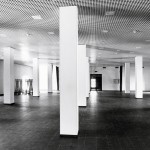 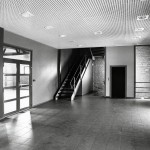 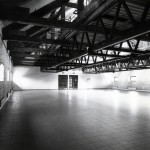