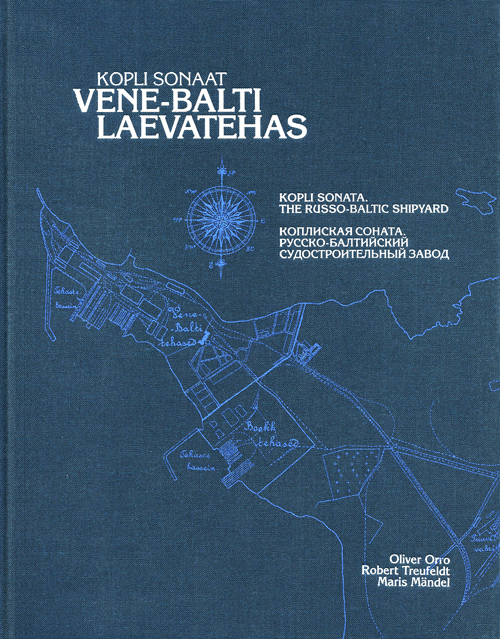 The book considers the spatial development of the Russo-Baltic Shipyard and its former settlement throughout 105 years. Established at the tip of the Kopli Peninsula on the eve of WWI in 1913, the factory was meant to manufacture naval ships for the Russian Empire and in short time became one of the biggest and most modern industrial enterprises in Tallinn. The accompanying settlement had besides the workers’ and management’s housing facilities to cover all necessities of life – from a hospital to cinema, church and school. The substantial book covers the large-scale as well as the minute detail, the festive as well as the everyday – it contains the remarkable designs by the famous Saint Petersburg architect Aleksandr Dmitriyev for the factory complex, but also photos and designs of sheds and kiosks, pictures of people and trams, machines and the sea. This is the environment in Kopli – full of contrasts, enthusiasm and degradation, exciting stories and intriguing secrets.

Robert Treufeldt presents the background of the establishment of the factory – the founding of the new system for the naval defence of St. Petersburg. Maris Mändel looks at the factory through the perspective of construction history, introducing the concrete and metal constructions of the production buildings which were novel at the time. Oliver Orro recounts the story of architectural developments and changes in the factory complex and its settlement, looking at it in a broader framework of social and economic history. The book reveals several unknown facts, which are noteworthy and fascinating not only in the context of the Russo-Baltic Shipyard and Kopli, but also more widely from the perspective of the history of Tallinn.