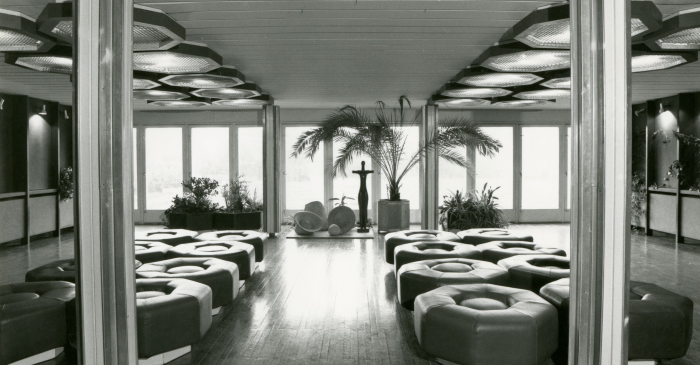 For the first time, this exhibition explores the work of Aulo Padar, one of Estonia’s most renowned interior architects, presenting him as a person, educator and architect. The exhibition commemorates Padar’s 80th birthday and the initiators are his students: Sille Pihlak, Grete Veskiväli, Kadi Karmann, Maarja Varkki, Ahti Grünberg, Mari Põld and others.

Along with the exhibition, a compendious catalogue compiled by Karen Jagodin will be published and a portrait documentary film by Maris Kerge will be screened.

The most celebrated part of Aulo Padar’s projects are the interiors of public buildings and former kolkhoz centres. Together with architect Toomas Rein, he completed the main building of the former Linda kolkhoz in Kobela (1971–1973) and the main building of Rapla Construction Office KEK in Rapla (1973–1977). Padar was also part of the collective designing the Pirita Sailing Centre (1975–1980), built for the Moscow Olympic Games. His work includes the interior architecture of the Turist foreign-currency store (1981–1982) and the now demolished Sakala Centre, formerly known as the Political Education Building (1982–1986). Therefore, during his career, Padar had the opportunity to deal with some of the most iconic buildings in Estonia. As a highly original designer, he created interiors that were or still are valuable both as a whole and in terms of the individual objects found in them. Padar’s work reflects the architecture and spatial design of the Soviet period more broadly, and is increasingly important now that the origins and construction stories behind the monumental spatial concepts of the era are being documented.