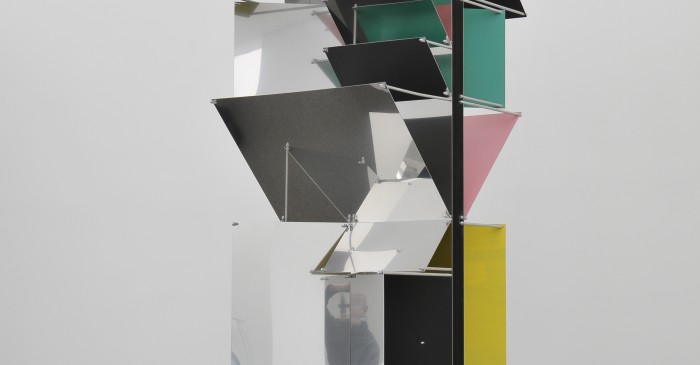 Peter Skubic (b 1935) is an Austrian artist with Serbian roots. Since graduating from the University of Applied Arts Vienna, he has exercised a strong voice in the fields of both jewellery and fine arts. With his characteristic provocativeness and adventurous spirit, Skubic has been a trailblazer of contemporary jewellery while also performing powerfully on the performance-art, body-art, and spatial-object arenas.

One shouldn’t let themselves be misled by the aesthetics of Skubic’s works, fined-tuned to the minutest of details – he interprets art as an intellectual discipline. One undertaking that left a very deep mark on jewellery history, for instance, is when he had a stainless-steel plate surgically embedded in his arm in 1975. And then later had it removed.

On display in the Museum of Estonian Architecture are 15 spatial objects that comprise Skubic’s most internationally-renowned theme: polarised steel and pure colour set to interact in reflections and established proportions. Among these is also his very first reflection piece with six rugs, from the year 1990. The mirror has been an important and very central leitmotif in Skubic’s works for already 35 years. The master himself sees more to mirrors than a simple visual category: they signify the negation of reality. As a backwards simulator of reality, the mirror opens a Pandora’s box of endless interpretations.
Despite being up in his years, the old master is still brimming with creative zest – displayed in Tallinn is also a fresh series of smaller mirror pieces, as well as jewellery just unveiled at the grand Schmuck 2016 exhibition in Munich last spring, which are part of a series titled “Nix Dahinter” (“Nothing behind”).

A mellow but determined free-thinker, Skubic has also left his teacher-fingerprint on artists of the younger generation (professors in Cologne, Salzburg, and Halle). His pieces can be found in several of the world’s top museums (the Metropolitan and the MAD in New York; the Museum of Contemporary Art, Tokyo; etc.). In 2014, Skubic was conferred an honorary doctor’s degree by the Estonian Art Academy. The living classic currently works and resides in Gamischdorf, Austria.