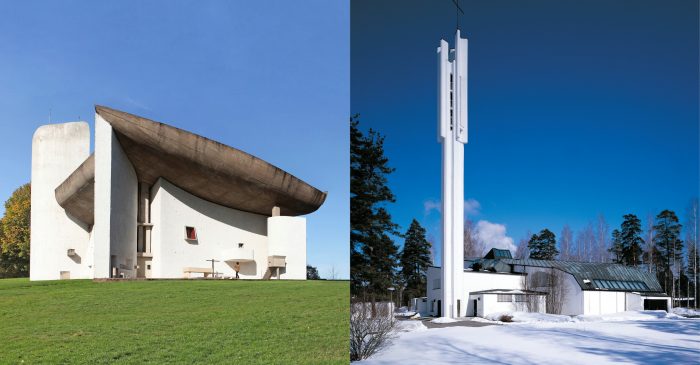 Museum presents the works of two giants of 20th-century architecture, Le Corbusier and Alvar Aalto, as seen through the lens of Jari Jetsonen. Jetsonen is a recognised Finnish photographer, who has been photographing Alvar Aalto’s architecture for over 20 years. As a dedicated photographer of architecture he became fascinated by the points of contact and similarities in the forms and ideas in both the buildings and thinking of the two seemingly oppositional architects. What becomes important here is the point of view of the artist and the way he sees buildings. Referring to Johann Wolfgang von Goethe’s idea that architecture is like frozen music, Jetsonen explains: “I have tried to interpret this frozen music by approaching buildings in different ways. Sometimes the architecture peeks in the middle of nature as if it was a wild animal in the jungle or I would take a picture of the deer descending to the edge of the pond. Occasionally, architecture can be described orderly or monumentally or approached heroically from below.”

Le Corbusier’s new white architecture made a lasting impression on the young Alvar Aalto in summer 1928, when the architect first travelled to Paris with his wife Aino Aalto. This trip opened his eyes to Modernism. At the time, Aalto never met Le Corbusier; however, he did get to know his work, such as the newly completed Villa Stein in Garches. It is the same international functionalism that inspired the best known works by Aalto from that period, like the building for the Turun Sanomat newspaper and the Paimio Sanatorium. Later, the two men met on the international architecture scene several times, although, they ended up taking very different creative paths – one is often known as a rigid rationalist and theorist, the other as a creator of emotional spaces, inspired by landscape and culture. Jetsonen’s view of their work shows that such classifications are relative and more than simply the personas of the two architects, the autonomy of architecture and general spatial qualities such as light and shadow, the positioning of the architectural volumes, emerging views, connection to place and nature are also highlighted. Images, mostly juxtaposed in pairs, are simultaneously specific and universal, while singing with praise for the ability of the classics of modern architecture to remain captivating and relevant even half a century later. In writing the accompanying text for the exhibition, Juhani Pallasmaa, one of the best-known Finnish architecture theorists, compares the two men, and states that as an architect, author and person, Le Corbusier played a significant role in shaping modern architecture and culture. However, Alvar Aalto’s biological, psychological and empathic way of thinking that focuses on “little man” has so much more to offer in today’s world, considering the uncertainty of our future.

Jari Jetsonen (b. 1958) works in the field of architecture as a photographer, writer and model maker. He has taught at Helsinki University of Technology (1989–1999), Nihon University in Tokyo (2000) as well as Aalto University. Jetsonen has published several books of photographs on Alvar Aalto’s work, Finnish church architecture and saunas.