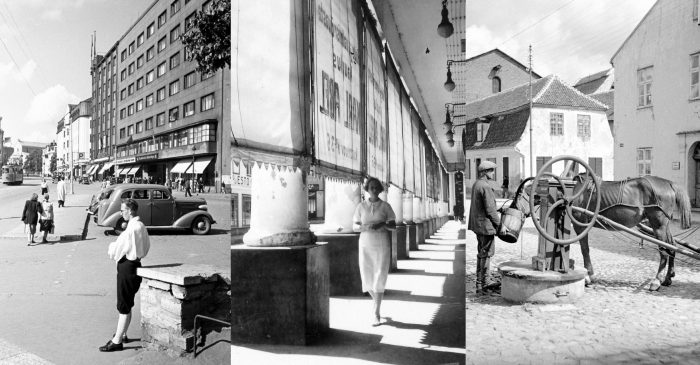 Cityscape. The main streets of Tallinn, Tartu and Pärnu

The exhibition brings to the viewer the changes in the central streets and squares of three Estonian cities during the last century and a half – from the time when photographers captured the first city views that came to us. The choice of these three cities is partly subjective, because unlike, for example, Narva or Rakvere, the organizer of the exhibition is thoroughly acquainted with the historical photographic heritage depicting Tallinn, Tartu and Pärnu. The views of Tallinn include two central city squares – Viru and Vabaduse Square and the two streets connecting them (Pärnu maantee and Estonia puiestee). The views of Tartu are from the area of the city center, which is between the Raekoja plats (Town Hall Square), the Emajõgi River and the current streets of Riia and Ülikooli. The views of Pärnu extend from the square in front of the current Endla Theater to the front square of the historic Endla Theater. The main emphasis is on the oldest, high-quality photos possible, choosing as many as possible that have not been published before (if at all). In both Tartu and Pärnu (less so in Tallinn), the devastation of the war in 1941 and especially in 1944 changed the areas covered by the exhibition almost beyond recognition. Thus, the exhibition should offer visitors a great deal of joy of discovery. Photographs from the Soviet period, which could offer opportunity for nostalgia in an older viewer, have rather been left out of the selection. All contemporary photographs are made by the curator Aare Olander during the last 12 years.